Brad SmithPosted on May 22, 2013 by Heartbeat of a Planet 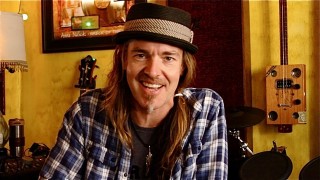 Brad Smith got his initial big break as a songwriter and bassist with ’90s rockers Blind Melon. Smith actually penned their breakthrough hit single, “No Rain” years before the band had formed. With their debut certified multi-platinum, Blind Melon appeared to have a successful career ahead of them. But tragedy prevented it happening — after only one more release, lead singer Shannon Hoon died midtour from a drug overdose, promptly ending the band.

But Smith branched out after the band’s 1995 dissolution as a solo artist — proving he was not just your average sideman.

The following year saw the release of Smith’s much-delayed solo debut, titled Mercy, issued under the alias Abandon Jalopy. Smith followed that with a second album, Death and Joy, in 2012. He is currently working on Abandon Jalopy’s third album.