Danny SaberPosted on September 25, 2013 by Heartbeat of a Planet 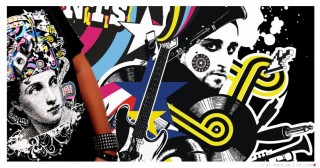 Saber has earned a reputation for diversity in his production and remixing talents, as the genres of the artists with whom he has worked have included pop (Madonna, Seal), rock (David Bowie, U2, The Rolling Stones), heavy metal (Ozzy Osbourne, Korn, Marilyn Manson), hip-hop (Busta Rhymes, Public Enemy, Judakiss), and more. Saber co-produced and performed on Alice Cooper’s Along Came a Spider album, and has songwriting credits on eight of the eleven songs on the album. He has also scored and or contributed music to a wide range studio and films (Blade II, Moulin Rouge, Dallas 362, The Limey, Played).