Hani NaserPosted on March 21, 2012 by Heartbeat of a Planet 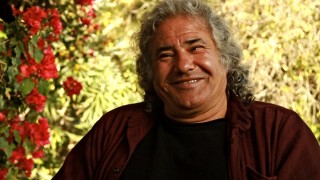 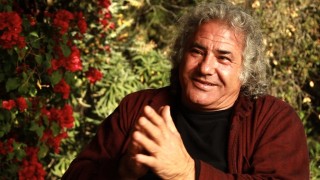 Multi-talented Hani Naser is a virtuoso percussionist and Oud player. Considered a master in his field, Naser inspired Randy Lewis of the Los Angeles Times to call him a “Veritable Hand Drum Wizard”. The breadth of Naser’s talent has earned him the opportunity to perform and record with many of the most influential artists of this era including Nickey Hopkins (Rolling Stones), Jackson Brown, Bonnie Raitt, Ry Cooder, Jim Keltner (John Lennon’s drummer) Steve Miller, Los Lobos, The Violent Femmes, Don Henley, Hamza El Din, Kazu Matsui, Jennifer Warnes, David Broza, Paco De Lucia, Santana, Brian Ritchie,Tony Trischka, Leftover Salmon, Quick Silver Messenger Service, John Hyatt, Warren Zevon, Ruben Blades, Lou Reed, Blind Boys of Alabama, David Lindley, and many other great musicians. Naser is at home in a multitude of musical styles and has a well deserved reputation as an expert improviser and prolific songwriter.
As a child in the hills above Jordan, Hani remembers many mornings listening to his grandfather, the village poet recite poetry while grinding fresh roasted coffee with a stick in a gourd like pot. Accompanied by the rhythmic crunching of the beans, his stories and songs provided a rich beginning for Naser’s musical path. This unique influence is the source of Hani’s eclectic drumming style. Nowhere is this better revealed than in his recent collaborations with rock legend David Lindley. During the duo’s seven years of touring the world, they produced what Paul Harrar of The Union calls, “One of the finest jam sessions in the music business”. Reviewing a concert featuring David Lindley and Hani Naser, Los Angeles Times music critic Randy Lewis writes: “David and Hani make a convincing case for the essence of musical forms and in the process they have produced an enduring testament to the timeless flexibility and resonance of the Middle Eastern, Flamenco, Rock n Roll, Jazz, and Blues forms.” Their album “Live in Tokyo” was chosen By Guitar Player Magazine as one of the top 100 albums of the last decade.

Naser was featured on Hamza El Din’s latest album “A Wish” which topped the World Music charts. For Hani music doesn’t have a perspective, or an opinion, it doesn’t allow for that. Music only allows for the moment. Throughout his life Hani has had a holistic sense of musical experience and the need to communicate that on a global level. He recently toured the war-torn Middle East with Israeli singer-songwriter David Broza to promote peace through music, a mission very close to Hani’s heart. They were invited by The Israeli and Jordanian Governments to perform in concert during the peace signing between the two countries.

Hani has also lead intensive workshops entitled “The Healing Powers of Rhythm and Music”. Naser’s lifelong exploration of the spiritual dimensions of music has led him to the realization that “Every drum has its own voice.” Going deeper into the mysteries of music he continues, “There is a universal rhythm that I am constantly trying to be in touch with. We are vibrations. Sometimes vibrations get out of sync. Music, I have found, brings back that balance.”

Hani Naser continues to lead these workshops at Esalen and other institutions and has formed a band with Walfredo Reyes Jr., Armand Sabal-Lecco, and Craig Eastman.