Huit KilosPosted on March 20, 2012 by Heartbeat of a Planet 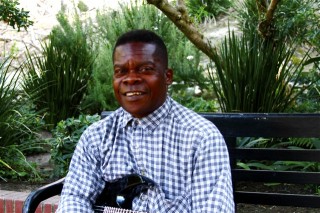 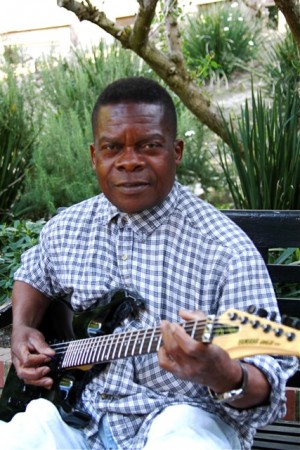 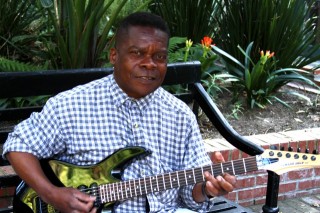 Huit Kilos, guitar virtuoso and composer, started making music on a guitar made from a cooking oil can and a piece of wood. At first playing secretly, as his father was opposed to Huit’s becoming a guitarist, the young boy prevailed when one day his family, to their surprise, saw him playing the guitar on television! He was only 12 years old. Huit Kilos went on to become Africa’s best known lead guitarist — a leader in the creation of the Congolese and Soukous guitar sounds that swept Africa and Northwestern Europe with their immense popularity.

As lead guitarist for a number of top bands, Huit Kilos is one of the handful of Congolese studio musicians who has given shape to the highly distinctive Soukous sound. He has recorded as a studio guitarist on over 100 albums and rocked the most demanding dance crowds in live performances around the world.

Tabu Ley is, of course, Huit Kilo’s longest and most renowned association. As Tabu Ley Rochereau is often credited with being the creator of soukous, one would be remiss in not crediting lead guitarist Huit Kilos as a seminal force in that creative process. Together, Tabu Ley and Huit Kilos brought rumba and soukous music to the western world, and made Tabu Ley Rochereau one of the all-time greatest stars not only of Congolese music, but of African music as a whole.
After working together across Africa for three years, in 1988 Tabu Ley Rochereau and Huit Kilos moved to Paris to spearhead soukous’ historic drive to European popularity, most notably in France, Belgium, and the Netherlands. While focusing most of his efforts on Tabu Ley Rochereau’s Afrisa International Orchestra, in Paris Huit Kilos also recorded with many African-Parisian bands on numerous hit records targeting principally the European market.

Now living in Los Angeles, California, USA, Huit Kilos is producing his own records and continuing his ubiquitous studio work both as a guitarist and as a composer. In America he has completed several record releases with his own group, Huit Kilos & Yoka Enzenze: “Huit Kilos in America” and Huit Kilos & Yoka Enzenze, “Eucharistia.” His most recent release, “God Bless Africa”, with the hit song “Congolese People: Wake Up!” (“Peuple Congolais Reveille-Toi!”, is a collaboration with philosopher and song writer Gassy Dyndo (brother of Dindo Yogo). It is a “single” record consisting of three songs addressing the current civil and political conditions of the Democratic Republic of Congo (the former Zaire), and encouraging the people of the DRC to hold on to hope, and support the democratic unity of their vast nation. Huit has also been playing guitar for several African bands located on the US west coast and working regularly with Ricardo Lemvo and Makina Loca, the Congolese and Salsa fusion stars. Huit’s collaboration with Lemvo began in 2001, and Makina Loca continues to break new ground in connecting anew the long-closely-associated Cuban and Congolese sounds.

While known principally for his leadership in the realm of African music, Huit Kilos virtuoso skills on the guitar are not limited by genre. You will be surprised to hear him playing salsa (tres), other forms of Latin music, Jamaican Reggae, Antillean and other Caribbean genres, as well as blues, country, rock and myriad other stylings.