Orpheo McCordPosted on May 22, 2013 by Heartbeat of a Planet 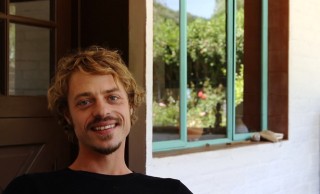 Percussionist Orpheo McCord was named after the Greek god of music, Orpheus, so it is quite fitting that he has made music his career.

Edward Sharpe and the Magnetic Zeros formed in 2007 in Los Angeles. McCord plays percussion, drums, marimba, and provides vocals in the band. In 2009 the 10 member troupe released their debut album Up From Below which featured the universally appealing hit “Home” as well as fan favorite’s “40 Day Dream” and “Janglin”.

The past few years have been spent constantly touring the world while winning over audiences at festivals like Coachella, Bonnaroo, Lollapalooza, Leeds, Austin City Limits and more. With their follow up album Here featuring “Man On Fire” and “That’s What’s Up” recently being released, the band will tour Europe, North America and Australia this year while a third album is expected in early 2013.