The Soweto Gospel ChoirPosted on November 28, 2011 by Heartbeat of a Planet 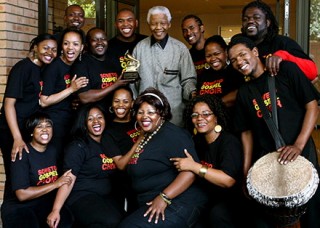 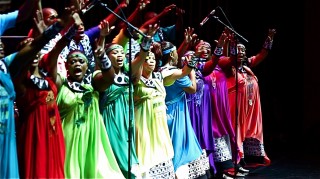 The Soweto Gospel Choir are a much-celebrated, multi-award winning music phenomenon from South Africa.  Formed only in 2002, they have already enjoyed a meteoric rise to international fame.

This dynamic choir performs both traditional and contemporary music, adding its own unique feel and interpretation to both.  Their earthy rhythms, rich harmonies, and acapella numbers, as well as accompaniment by an exciting 4 piece band and percussion section make the Soweto choir simply heavenly. Add to this energetic dancing and vibrant, colourful costumes, and the mix is something not to be missed.

At the historic 46664 Concert in Cape Town in 2003, they sang in front of Nelson Mandela along with such musical greats as Bono, Queen, Peter Gabriel, Anastacia, Jimmy Cliff and the Eurythmics.

Since then, they have released multiple, critically-acclaimed albums and toured the world several times over. Along the way, they have won two Grammy Awards, two Gospel Music Awards, two SAMA Awards, and countless other awards and accolades.

Through it all, the Soweto Gospel Choir continues to make giving back a priority.  They routinely raise money for their charity, the NKOSI JOHNSON AIDS FOUNDATION, as well as contribute to other charities, such as Unite Against Hunger, the Nelson Mandela’s Children’s Fund, and support for the victims of Hurricane Katrina.