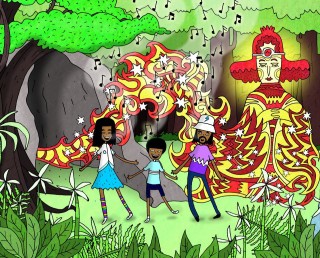 Amaterasu & UzumePosted on March 20, 2012 by Heartbeat of a Planet

From ancient civilizations to our current era, music has woven itself through our stories, religions, lives, and our hearts…

The following story is from Japan

“Long ago, the sun goddess, Amaterasu, grew very sad and hid herself in a deep cave. This turned the world pitch-dark and there was no more light. The people fell into great despair. A conference was held to discuss how to bring Amaterasu out of her cave and bring light into the world again. Much arguing and debate went on, but no one knew what to do.

Finally, Amaterasu’s sister, Uzume, the Goddess of Laughter, came up with a plan. Together with the men and women, Uzume began to dance and beat drums. The children began to sing beautiful melodies. And despite the darkness that covered
the world, the people felt a surging of hope begin to grow. Amaterasu felt their spark of happiness even from within her cave. She felt her spirits begin to lift as well. She became so curious that she came out of her cave and light fell on the world once more. Music and dance thus began as thanks-giving to the gods.”