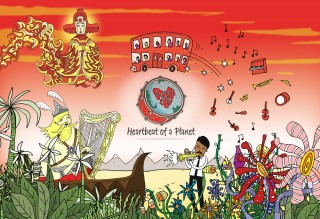 The Journey…Posted on August 3, 2012 by Heartbeat of a Planet

We are so lucky and blessed to be on this journey we call HEARTBEAT OF A PLANET… We’ve met and been befriended by so many incredible musicians from such vastly different backgrounds. We’ve been welcomed into countless homes, front rows, and hearts. And what began with us wanting to tell a story to the world has been transformed into something much greater through listening to the stories of the people we’ve met from around the world.

We’ve met a young band from England busking on the streets of Los Angeles, playing music born in the American south. We’ve met a guitarist from The Congo who made his name playing Latin music in Paris. We’ve met a musician from New Orleans who began his career during segregation, when he had to enter his own gig through the kitchen entrance, but who is now the President of the Musician’s Union. We’ve met a singer who had four children, two ex-husbands, and a bleak-seeming future at 19, but whose fireplace mantle is now heavy with a Grammy and countless other awards. We’ve met a choir from South Africa, whose definition and experience of life have been utterly transformed through the heavenly music they sing. And we’ve met dozens and dozens more, each with a story that deserves telling.

Perhaps the most amazing part of this journey has been to see the COMMON THREAD that runs through all of their (and our) stories. And that thread is the LOVE OF MUSIC, no matter the genre, and THE DESIRE TO SHARE that music with other people. As a species, OUR EXPERIENCE WITH MUSIC IS UNIVERSAL – it comforts each of us when we are sad, lifts us up when we’re down, celebrates with us when we are happy, and dances us into bliss. Music is a light and an experience that we can all share, regardless of the details of our lives.

Stay tuned for in-depth stories from our journey.

HEARTBEAT OF A PLANET